Below are my quick, spoiler-free thoughts on Suicide Squad. But first, just before I went in to see Suicide Squad, we got the very strong numbers from Thursday night, with $20.5 Million domestically and it set several records in other countries. (Unfortunately, it looks like SS will not be showing in China, similar to what happened to Deadpool. This is probably a loss of about $70-80 Million in their worldwide total.) That $20.5M number is the largest for an August release and 13th largest ever. This, plus the strong presale numbers (locked in before the reviews were released), bodes well for the opening weekend. 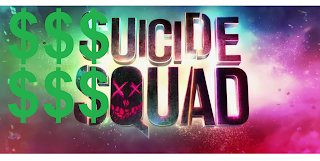 Even if Suicide Squad has a similar Friday to Sunday drop as did BvS, the $20.5M Thursday still predicts a domestic opening of $122.9 Million! That would set a new August record by almost $30 Million. (BvS had $27.7M on Thursday and $166M for the weekend.) If it maintains a bit better than BvS, it could approach or clear $130 Million.

Quick Reaction:
I really enjoyed the movie, but it didn't hit me at the deeper levels that I appreciate in movies and novels. I do think there's an interesting theme to explore upon multiple viewings about love being a humanizing force that can connect people (they don't have to love one another, but if they recognize the love in the other, that can be the basis of a bond) and if one still has love, they still have a reason to live and are, in some sense, redeemable. But I'll have to give that more thought.


The movie definitely presents some memorable characters, some memorable scenes, and it has a unique visual style (if not a unique action/choreography style). I found myself fully engaged in the first 15-20 minutes with some very comics-inspired set-up, and I also really like from the bar scene onward, including an emotionally effective denouement. But in some of the middle sections, it flirted with generic action territory where the momentum seemed a bit forced.


I really liked Harley and Joker's storyline, and Will Smith worked well as Deadshot, in my opinion. It's hard to say much more without getting in to details, and I like to process movies for awhile, so I'll wrap it up here, but right now I feel like I could list a lot of things that I thought worked well about the movie but I could also list quite a few things that I thought were a bit off the mark. For example, Katana was underutilized and one villain (Waller) was much better than the other.


Overall, based on my first viewing and only a little bit of process time, I give Suicide Squad a 7/10, and I can't really see it going much higher than an 8 for me because I don't give many 9's or 10's (I've probably only given 25 out of 1000+ movies) and to reach that level, I would've needed to see some more literary motifs and more fully developed themes.

Addendum: I got to see it a second time and I caught many more foreshadowings and setups, so I'm increasing my rating to 7.5/10.