This episode of the Justice League Universe podcast contains my quick reactions to the extended cut of Suicide Squad, released this week digitally.


Overall, the movie is basically the same -- the strengths (and flaws) remain intact. There are a few new moments that I think would've been good additions to the theatrical release, but there are also some parts that I think were wise to have cut out. I really like this version of the Joker, but I think some of the new footage works better as an extra rather than a part of the theatrical version of the film.

See also our analysis of themes and characters.
Posted by ottensam at 9:51 PM No comments:

I love DC Films and especially the burgeoning Justice League Universe. But I also often say that I like most of the Marvel Studios films, too, and I've even gone on record saying that people should be willing to like both movie franchises rather than picking sides and being antagonistic. Following the release of Doctor Strange and Captain America: Civil War, and with me being underwhelmed by both of those films, I thought it was time for me to revisit the claim that I "like most Marvel movies." Is that really true?

So here's a quick rundown of my personal opinions on a bunch of WB/DC and Marvel superhero movies, going back about 10 years. Let's see where I really stand:


Looking across the whole table, my rating averages 8.1 for the 9 WB/DC films and only 6.6 for the 14 Marvel films. So as expected, my tastes align more with the WB/DC side of things. But to answer the main question -- is it true that I like most of the Marvel movies? -- I tend to consider anything above a 6/10 as me "liking it" and so the Marvel average is above 6 and so is in the "like" range. Also, going film by film, there are 9 out of the 14 that I've rated higher than 6, so yes, it is true that I like most of the Marvel films. But...

DC's Rebirth initiative was both a creative move and a business calculation, the biggest one since the New 52 relaunch in 2011. In advance of Rebirth, I analyzed the sales numbers and came to realize that it makes fiscal sense to double ship the premiere titles and trim off some of the more niche titles. This was creatively risky (I loved Prez and The Omega Men, and Midnighter was good, too, for example) but it has turned out well because the quality of stories and art have been so good in the Rebirth books.

I have found it interesting to compare the Rebirth sales numbers to the New 52 sales numbers in 2011. So here is my update on those numbers: 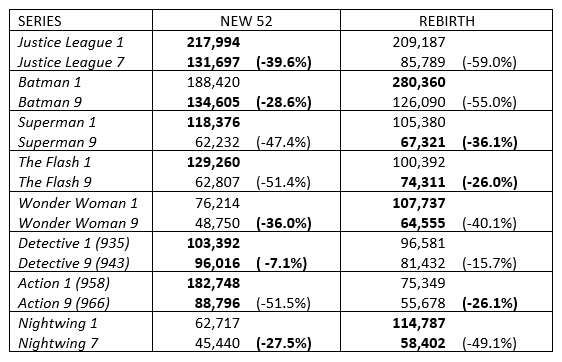 Before we pull out some numbers from the table, it is important to note two things in favor of Rebirth that do not show up in the table. First, Rebirth started with the Rebirth #1 issues, which gave most of the series a boost in sales even before they had the strong sales of the main #1. There was no counterpart to this in the New 52 relaunch. Second, because many of the Rebirth series ship twice per month (including all the ones in the table above), this means that DC has pulled in all these sales numbers in half the time it took to reach them in New 52. And the extra issues of Batman, The Flash, etc., have taken the place of the lowest sellers in the New 52 (e.g., OMAC, Savage Hawkman). So even if the Rebirth sales numbers were right on pace with the New 52, the Rebirth initiative would still be a doing better for the bottom line.

Now, the things that stand out to me from the table.

Read more »
Posted by ottensam at 9:02 PM No comments:

On May 27th, DC Comics kicked off the Rebirth era to great acclaim from critics and fans alike. In June they released their first batch of Rebirth #1's and saw a solid boost in comic sales. In July and August and September they actually surpassed Marvel Comics in terms of market share, which is a very rare thing (at least over the last 15 years).

In this post, I will share some of the numbers from the October sales reports from Diamond Comic Distributors (U.S. physical sales), as crunched by Comichron. For October 2016, Marvel returned to its typical roost atop the sales charts, but DC is hanging around much closer than it was doing in 2014, 2015, or the early part of 2016. Since acquiring the Star Wars line, Marvel has been a comic sales powerhouse. And along those lines, Marvel posted a dollar share of 35.9% to DC's 30.7% (Image 9.5%), and Marvel had a unit share of 36.5% to DC's 34.8% (Image 8.8%). The two market share figures are not the same because DC has a lower average price per issue, thanks to the $2.99 cover price on most DC books, which I personally appreciate a lot. 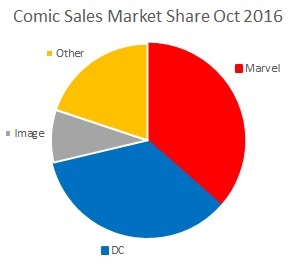 Marvel's sales were boosted by a few prominent #1's (e.g., Champions, Doctor Strange and the Sorcerer Supreme) and the next installment in their drawn out Civil War II event. Star Wars #25 also came out for them as a big seller. Meanwhile, DC ticked slightly down because they have exited their phase of Rebirth #1's and they are now into the heart of the ongoing series.

Even though DC was slightly behind Marvel for October, it is important to realize that the pie itself has gotten significantly bigger since Rebirth began. The total number of units sold in the US is up 11% over last year and up 16% over five years ago. This is astounding when one realizes that that industry growth is not counting digital sales, which are obviously way up since five years ago as well. So it's really a win-win right now for DC and Marvel.

Note: Take this however you wish, but while we're on the topic of money and DC/Marvel comparisons, you might be interested to know that Marvel CEO Perlmutter gave millions of dollars to the Trump campaign for president, last winter and right up through October.


Thanks to Alessandro Maniscalco
Man of Steel Answers, Suicide Squadcast
@JLUPodcast on twitter

Read more »
Posted by ottensam at 8:55 PM No comments:

I usually watch Marvel/Disney movies but I don't usually cover them on this blog. Recently, however, Jason Book and I talked about upcoming comic book movies from several studios. The first of those movies was Doctor Strange (Marvel Studios). Like several other Marvel movies, I thought it was fairly entertaining but not great in terms of the craft of filmmaking. My rating after one viewing is 6/10 and my (spoiler free) review is below.

Doctor Strange, directed by Scott Derrickson, has several promising features but each of them is held back by some accompanying flaws. Starting with the main character, I thought Stephen Strange had a fairly good arc moving from self-involvement to selflessness and Benedict Cumberbatch turned in a good performance. But that arc was a bit too obvious and cliche for my taste, and the film also suffered because I don't think any of the other characters had enough development or multi-dimensionality. It felt to me like everyone else was there to serve Strange's story -- and yes, this is his solo movie, but it is still possible to give the secondary characters some of their own development and nuance and I felt like Doctor Strange was underwhelming in this department.

Many people are praising the visual effects, and while I agree there are some elements that are visually stunning, I felt like the land/building warps were usually pointless and only served to create an interesting backdrop to the action. There were a couple scenes where the land warps were used by a character to try to trip or stop another character, so that is at least minor purpose, but that still seems like an inefficient way to stop them if you have magic at your disposal, and most of the other times I couldn't discern any real purpose for all the visual craziness that was happening on the screen.

Jason Book and I discuss our anticipation and some recent footage released for some upcoming comic book movies -- Doctor Strange, Logan, Guardians of the Galaxy (Vol. 2), and Justice League.


It's been a great year for comic book movies thus far in 2016, but there are several good things still on the horizon... and we didn't even have time to talk about Wonder Woman, which looks great and will have a new trailer coming this week.

Posted by ottensam at 6:31 AM No comments: