The reign of comic book movies at the box office continued strong throughout 2016, with the slate of 7 mainstream CBMs pulling in approximately $5 Billion worldwide (on a total budget of just $1.2 Billion) and taking 6 of the Top 15 slots for the year. Overall, it was CBMs and family films (e.g., Finding Dory, Zootopia, Secret Life of Pets) that dominated the box office.

The feared slowdown or "superhero fatigue" has not yet materialized. At the beginning of 2016, I did an adequate (but not great) job with my 2016 CBM predictions -- I thought Deadpool would be huge, but I didn't realize how huge; I overestimated BvS and underestimated Civil War (which I kind of knew I was doing); and I was very close with my prediction for Suicide Squad. I give myself particular credit for my prediction about the sum total CBM performance -- I predicted $4.9 Billion total across the 7 CBMs and it looks like they are going to come in right at $5.0 Billion, so I had the size of the pie right, I just didn't portion it out perfectly. 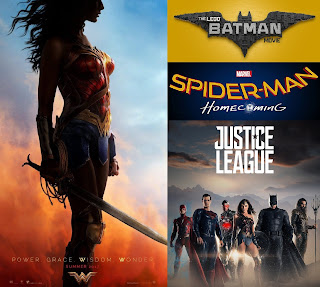 Looking ahead to 2017, here are my box office predictions for worldwide gross. I based these numbers on past performance, trailers, social media buzz, competition in the release calendar, and my own gut instincts.
Some notes:

In this video, I give my thoughts on the Justice League Action premiere (Cartoon Network). If you don't have time to watch it, then let me just say that I really enjoyed it (as did my little boys). The style, the story, and the voice acting are all solid. You should definitely check it out, even if you don't have Cartoon Network you can find it on Amazon or iTunes.


I mentioned that I was not a big fan of the bat logo or the Superman S-shield design (at times), but I should've also said that overall I was very pleased with the costumes. I am especially glad with the Superman suit they went with, because I like the belt rather than the trunks and I'm also glad they have the red boots (which are currently missing in the comics).

Posted by ottensam at 7:32 AM No comments:

It looks as though, after about 5 months of impressive sales numbers for DC Comics in the DC Rebirth era, things have returned to normal in November. And in the case of physical comic book sales, "normal" means a pretty clear edge for Marvel.

Marvel is back up to a 38% dollar market share to DC's 26%, with Marvel buoyed by a batch of new #1's (five #1's for Marvel in the top twenty), as is their habit. They also continue to benefit from the Disney acquisition of the Star Wars properties.

On the DC side, Batman continues to be an extremely popular character. The Batman title (Tom King, writing) took the top two spots for the month, and All-Star Batman (Scott Snyder) and the Batman Annual also placed in the top ten. Detective Comics (James Tynion III) also placed two issues in the top twenty, and the other relatively strong sellers were Justice League, The Flash, and Superman. Here is Comichron's complete rundown of the sales numbers: http://www.comichron.com/monthlycomicssales/2016/2016-11.html

For a great podcast that helps you keep up on the main character comic books from DC, check out the DC Comics Squadcast.

Posted by ottensam at 9:39 PM No comments:

In this episode of the Justice League Universe podcast, Alessandro and I give our commentary on the theatrical version of Suicide Squad (Warner Bros), written and directed by David Ayer. (Because of technical limitations of Sam's recording setup, we had to use the DVD version which is the theatrical cut. For thoughts on the extended cut, see our prior episode.)

We synchronize our playback at the 9 second mark right when the R RatPac logo appears.

This episode of the Justice League Universe podcast focuses on Batman v Superman Scene 61, Batman, Superman, and Lois's conversation after the Batman-Superman fight.

Thanks to Alessandro Maniscalco
Man of Steel Answers, Suicide Squadcast
@JLUPodcast on twitter

<Transcript of the episode>

Review of Batman 12: I Am Suicide (Part Four)

In this video I share my thoughts on Batman #12, by Tom King and Mikel Janin. This is the much discussed issue where Batman is making his way into Bane's castle in Santa Prisca and it is overlaid with a poignant letter from Bruce Wayne to Catwoman.


I am still a fan of what Tom King is going for with his run on Batman, but it is not without its flaws. Also, I forgot to mention it in the video, but this issue also gives a new possible interpretation of the vicious crime that originally put Catwoman away.

Posted by ottensam at 1:52 PM No comments:

This episode of the Justice League Universe podcast focuses on Suicide Squad, the scenes where Griggs meets the Joker, Enchantress finds her brother, and Incubus comes to life in the subway station.

Thanks to Alessandra Maniscalco