With Suicide Squad overcoming critical negativity to post a huge record August opening and then showing strong legs with only 52% and 42% drops the last two weekends, it now looks clear that the DC Films Justice League Universe (often referred to as the DCEU) is three for three in terms of financial success. Suicide Squad should safely clear $675 Million worldwide. Movie finances are notoriously hard to pin down, but here are two quick pieces of evidence that Suicide Squad, like Man of Steel and Batman v Superman before it, are financially profitable:

The films in the Justice League Universe have also had incredibly strong home media sales thus far, and Suicide Squad also managed to support the number one album in the country with its soundtrack. But focusing just on the worldwide box office totals, we can also put this new film series into context by comparing it to many other film series of the 21st Century. Below is a graph that shows the DCEU in pink but also shows 8 other film series -- The Dark Knight trilogy, The Hunger Games, James Bond, Transformers, Fast & Furious, Harry Potter, the X-Men universe, and of course the Marvel Cinematic Universe (13 films and counting). This graph uses a $715 Million estimate for Suicide Squad, which is probably low. 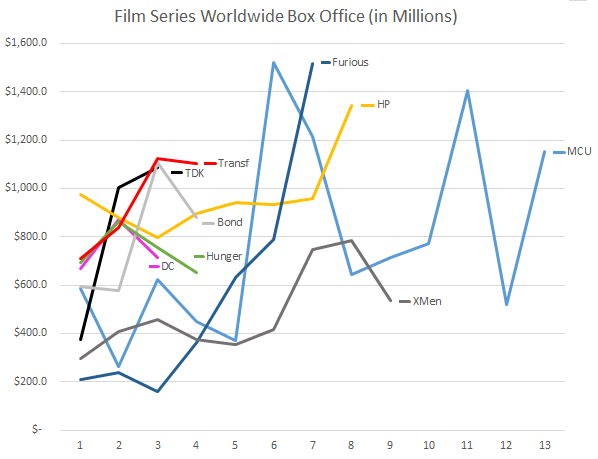 Some things that stick out to me from this graph:

Of course, fans and film buffs usually spend most of their time comparing the DCEU with the MCU. Looking ahead at these two series, it will be very interesting to see how Doctor Strange performs at the end of this year. Will it be the 5th MCU film to clear the $800 Million mark? Probably not, given all the holiday season competition and the fact that there have already been quite a few hit superhero movies this year. I think it's more likely that it will finish around the MCU median of $600-650 Million. Still a solid money-maker.

As for the DCEU, I expect Wonder Woman to outperform MCU's fourth offering ($449 Million for Thor) and I expect Justice League to outperform all prior DCEU films as well as the first 5 MCU films. So DCEU's curve going forward should be pointed toward the highwater mark that is The Avengers. Many people were expecting Batman v Superman to make the jump up into the billion dollar club, but looking at this graph shows that that was a pretty unrealistic expectation. Only The Dark Knight made such a jump, and that is widely considered the best comic-book movie of all time and it had general appeal as well, buoyed by Heath Ledger's Oscar-winning performance. Of course The Avengers also made a big leap above its predecessors, but I think the DCEU counterpart to The Avengers will be Justice League, not Batman v Superman.
Posted by ottensam at 3:42 PM