Prepping for JUSTICE LEAGUE: What you need to know from Batman v Superman

This post is for people who are interested in Justice League -- the first live-action team up of iconic heroes like Batman, Wonder Woman, the Flash, Aquaman, and Cyborg -- but who either didn’t see Batman v Superman or aren’t quite sure what ideas to carry forward from that movie into the new one. I briefly cover everything you need to know from Batman v Superman, focusing primarily on the character arcs and mindsets of Clark Kent and Lois Lane, Lex Luthor, Bruce Wayne, Diana Prince, and the other heroes.
View this article on YouTube 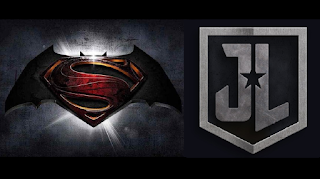 Clark Kent of course is Superman. Lois Lane knows this and the two of them are in a deeply committed relationship in Batman v Superman. A danger, however, is that Superman’s love for Lois can be used to draw Superman into compromising situations. Throughout the course of the movie, controversy begins to swirl around Superman and mankind becomes divided in their opinions of him. Some people worship him as a god, some are inspired by him as a hero, but other people come to resent him or hate him as an alien outsider, or they fear him because of his great power.

A lot of that controversy and hatred is stirred up by Lex Luthor, the brilliant billionaire CEO of his father’s LexCorp company. He orchestrates some tragic events linked to Superman and Lex manipulates the media and the masses and he preys upon their tendency to prejudge before all the facts are known. He stokes people’s fears of outsiders and he uses people’s private pains to manipulate them into directing their anger at Superman. All of this really hits Superman hard because he is just trying to help out as best he can, but the negative reactions make him wonder if he really is doing the right thing. The world of mankind seems to be a powerfully corrupting place. 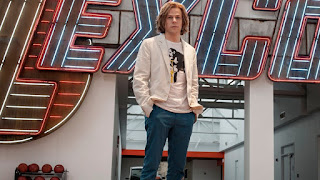 All of this leads to the conclusion of the film where Lex Luthor thinks he has trapped Superman into a situation where he will be disgraced or killed, or both. But Superman finds a way to cut Lex’s gordian knot. The key is Lois Lane. Superman’s love for Lois and the fact that she loves him unconditionally gives him the strength and conviction to see his way out of Lex’s trap. Superman actually sacrifices his own life to stop the Doomsday monster Lex had created. This ultimate sacrifice confirms Superman’s inner goodness and wins the public’s adoration. Where Lex had been seeding fear and hatred, Superman’s actions resolved the controversies, and although he is no longer in the skies to protect Earth, he has inspired humanity and promoted self-sacrifice and love. 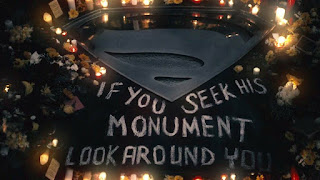 So going into Justice League, we can look for the continuing reverberations of Superman’s heroic sacrifice. And as for Clark Kent, we saw at the end of Batman v Superman that he had been intending to propose marriage to Lois, and she does actually receive the engagement ring from Clark’s adoptive mother, Martha Kent. Clark is buried there in Smallville, Kansas, though we get a strong hint that his Kryptonian cells are not dead and decomposing in the same way that human cells would be. And as for Lex Luthor, it’s important to note that before he was arrested, Lex managed to use Kryptonian technology to communicate with some potentially dangerous aliens and to tell them that Superman was no longer alive as Earth’s defender.

Moving on to Bruce Wayne. In Batman v Superman, he is in a very dark place. He has still not come to terms with the trauma of losing his parents, and then the arrival of Superman into the world heightens his feelings of powerlessness. Bruce is questioning whether his 20 years as Batman has really made much of a difference. From this damaged mindset, rather than coming to terms with his own issues, Bruce directs all his energy and anger toward Superman. He projects onto Superman the idea that everyone can eventually turn dark, and because Superman is so powerful, if that were to happen with Superman it would be an extremely dangerous situation. So Bruce takes it upon himself to secure kryptonite and destroy Superman, and in doing so, Bruce subconsciously hopes that he might relieve his feelings of powerlessness and finally do something that matters. 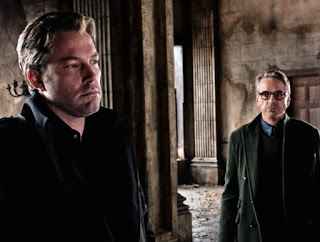 Throughout Batman v Superman, Bruce falls deeper and deeper into this negative mindset and it seems like he might even pull Superman down into a similar mindset, but thankfully, before it is too late, Bruce has a moment of realization where it dawns on him that he is becoming more like the criminal who killed his parents rather than a hero who would save them. And so instead of taking out Superman, Bruce is actually able to use his abilities as Batman to save Martha Kent, Clark’s mother. Bruce comes to see multiple aspects of Clark / Superman and understands that he is not the threat he had presumed him to be, and at the end of the movie, Superman’s sacrifice confirms that Bruce had been wrong about him and inspires Bruce to become a better man.


So overall, in Batman v Superman, Bruce went through a dark time and he became very isolated, but by the end of the movie, he is recommitted to the good fight and is ready to work well with others again. In particular, Bruce starts sharing with Diana Prince, aka Wonder Woman. Diana has a small but important part in Batman v Superman. She is a mysterious antiques dealer who is interested in Lex Luthor because Lex had been digging around in her past. Bruce is intrigued by Diana for multiple reasons and in the final battle of the movie she drops in as Wonder Woman to save Bruce’s life. She then joins the fight alongside Superman and Batman and is also affected emotionally by Superman’s death. 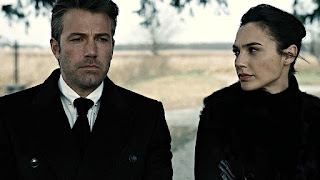 If you want to know more about Diana’s mysterious past, you can watch this summer’s Wonder Woman film. But for Justice League, the main thing you need to know is that she has started to form a bond of respect with Bruce and they have a conversation at the end of Batman v Superman about the possibility of them working together to protect mankind in Superman’s absence.

Other Heroes and Final Comments

The final thing you need to know from Batman v Superman in order to be ready for Justice League is that there are some other super-powered beings on Earth besides Superman and Wonder Woman. Lex Luthor had been gathering information on as many so-called meta-humans as he could, and he found evidence of Aquaman down in the ocean, of Cyborg -- a young man who’s head and torso were fused together with a piece of alien technology called a motherbox, and of the Flash, who has super-speed and who also seems to eventually gain the ability to time travel. There was a scene with the Flash in Batman v Superman where he seems to come back from the future to warn Bruce about something, and Bruce has a vision of winged aliens and an Omega symbol across a wasteland that used to be Gotham City and Metropolis. That vision of alien destruction will still be on Bruce’s mind, I’m sure, in Justice League. 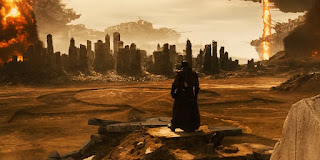 So that’s a quick rundown of some of the important, character-based information from Batman v Superman: Dawn of Justice. And I hope this helps you enjoy Justice League. You can find more coverage of the Warner Brothers DC Films on this blog or on the Justice League Universe podcast.
Posted by ottensam at 1:24 PM