DC Comics overtook Marvel Comics in comic book sales for July 2016 -- something that doesn't happen very often. As Comichron.com pointed out, DC has only led Marvel for 57 months out of the last 227 months, so only 25% of the time since 1997 when Diamond began releasing this information. And DC on top as been even rarer lately with Marvel's recent incorporation of the Star Wars comics and the success of the Marvel Cinematic Universe over the last 8 years. The last time DC posted a higher sales month than Marvel was October 2013 when Forever Evil was getting started and Superman Wonder Woman #1 and Sandman Overture #1 were released. Batman #24, of course, was solid as well. DC also led sales in September 2013, which as "Villain month" (a Forever Evil tie-in) and had many extra issues that shipped.

Last month, DC posted 35% of the dollar share and Marvel had 34%, with Image trailing in third at 8%. Fans seem to be appreciating the new $2.99 price on all the main DC books because DC's unit share was actually 40% to Marvel's 36%, so comic readers bought substantially more issues from DC but did so at a lower average cost per issue.

Below is my previous graph that looks at market share on the year-to-year basis. You can see that in 2015 Marvel posted a 39% dollar share to DC's 26%. In June 2016, the first full month of DC's Rebirth, DC took a step forward with 29.9% dollar share, but things really seem to be paying off for DC in July, with the move up to 40% dollar share. 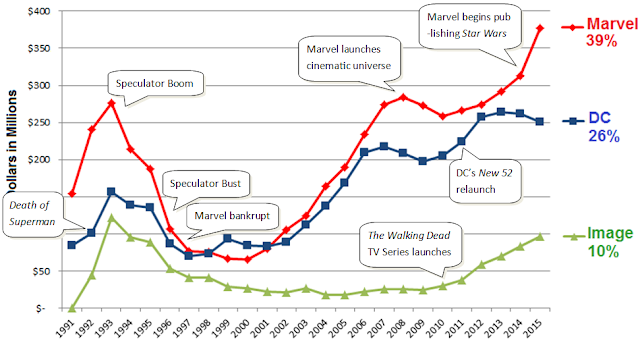 If DC can sustain at least a substantial portion of this gain, then there will be an uptick for 2016 in that year-to-year graph. They won't be able to overtake Marvel, because Marvel has already led for the first 6 months of 2016 by more than DC will be able to make up in the back half of the year, but it is still a good direction for DC. In short, the financial projections for DC Rebirth seem to be paying off, at least in the short term.

Let's look at some of the books that did particularly well.


For July 2016, the number one overall book for was Justice League. That series had a Rebirth issue and a new #1, written by Bryan Hitch with art by Tony Daniel. They're not spectacular issues, but they're pretty solid in terms of establishing the new status quo with the team and kicking off an arc. Batman #2 and #3, of course, sold well, written by the great Tom King. Nightwing also posted two very strong issues (ones that I was pleasantly surprised by, because I'm not usually a huge Nightwing fan), and New Super-Man #1 sold in the top ten for the month. That series features new Chinese characters and is written by Gene Yang. I have been very happy with the light tone and unique style of the first two issues and am definitely looking forward to more in the series. I also think it's pretty smart for DC to target a Chinese audience because they have a growing digital market for comics over there. 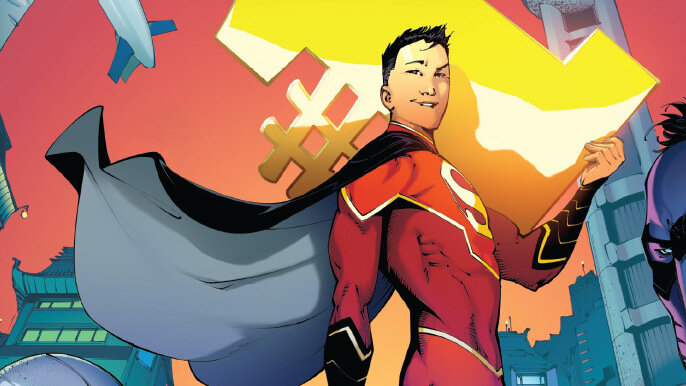 Hal Jordan & the Green Lantern Corps rounded out the top ten, even without Hal being featured in the Warner Brothers film universe. But August will feature two new series that do tie-in to the film universe -- Harley Quinn and Suicide Squad. I think Justice League will fall off a bit in August, but Batman will probably hold strong. That, plus the new #1's (DC was wise to stagger the new series rather than doing them all at once like they did with the New 52 in 2011), will give them a shot for strong month of August, as well.

By the way, here are my favorites books in the Rebirth era thus far:
Those are my favorites, but the crazy thing is that I haven't disliked any of the ones I've read. The creators seem to be in a pretty good zone with the characters overall. Let's see how long they can sustain this quality.