Comparing the DC Rebirth Lineup to the DC You Slate

Today DC Comics revealed their full comic book lineup for the Rebirth that is starting May 2016 with an 80-page issue written by Geoff Johns (for only $2.99!). The exciting things, to me, about Rebirth are the commitment to a $2.99 price on all the books (down from many of the bestsellers being $3.99 or even $4.99) and the consolidation of a lot of the main books into a single biweekly title that can have a strong creative vision, rather than spreading characters out through crossovers or multiple family books (examples of spreading things too much recently would be the Robin War event and the Superman Truth story arc). I also think the return to original numbering on Action Comics and Detective Comics is pretty smart (#1,000 is only a couple years away!).

In his interview at Comic Book Resources, Geoff Johns emphasized a return to the interconnected DC Universe and "legacy." Although I appreciate these sentiments, they seem to be a rebuking of the efforts of DCYou, which started just last June. DCYou focused on freedom from continuity where you could have books like The Omega Men (awesome!), Prez (creative and smart!), and Bizarro (fun and funny!) alongside The Flash and Batman, and you could have Justice League of America and Justice League telling epic standalone stories even while the members of the Justice League were doing completely different things in their own books.

So that led me to do a detailed comparison of the ongoing titles in the DCYou line with those just announced in DC Rebirth. Below is my rough organization of the slates, where I've tried to match up titles with their closest counterparts. 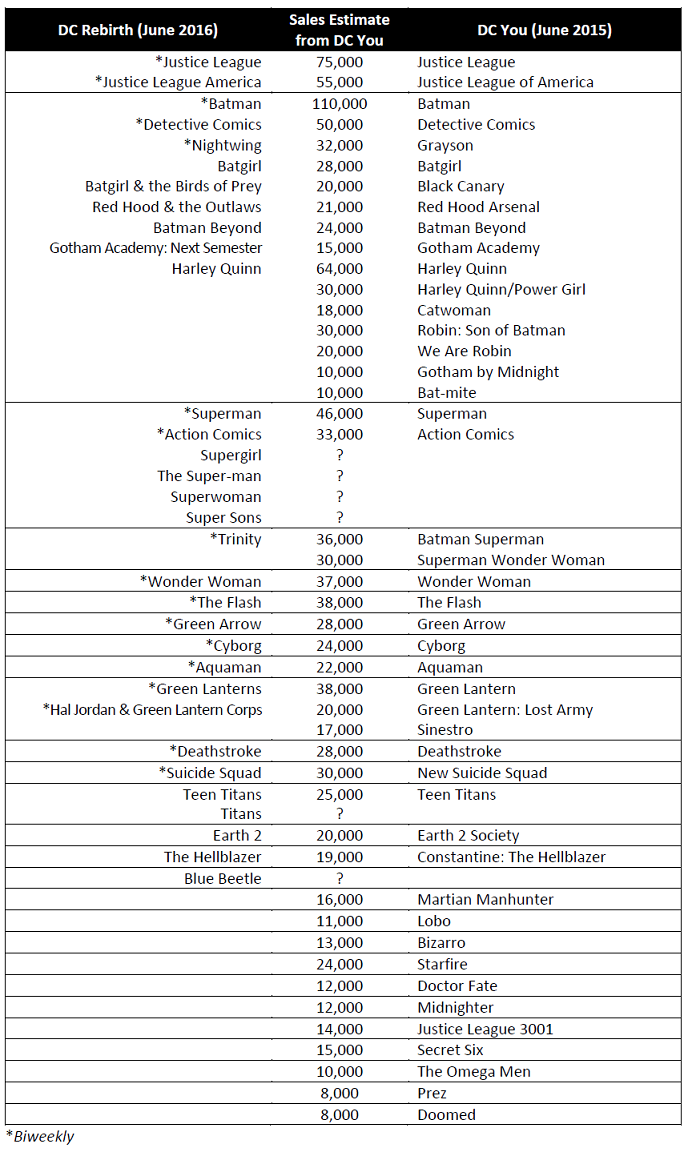 It's pretty easy to see where the DC execs drew their line in the sand. Only two books selling fewer than 20,000 copies are having a Rebirth -- Constantine: The Hellblazer and Gotham Academy. The other fourteen books under the 20,000 mark are being dropped or have been dropped already. Conversely, only five books that are selling more then 20,000 copies are being dropped, and a few of those are living on in some form (e.g., Superman Wonder Woman will be folded into Trinity, and Damien from Robin: Son of Batman will probably have a substantial role in Teen Titans or Titans).

Some key things to watch for to judge the success of Rebirth will be the following:

Also worth noting is that DC Rebirth marks a consolidation in the sense that there will only be 32 titles per month (once it's fully operational in the fall), but because of the biweekly books there will be 49 main DCU books produced per month. DCYou, by way of comparison, had 45 titles and 45 books per month. Back in 2011, the New 52 consisted of 52, of course. So Rebirth is a clear consolidation around the bestselling titles but it will still involve basically the same number of issues hitting the stands each month.

From this perspective, Rebirth makes good business sense. Whereas before there would be one Batman book and maybe one Harley Quinn book (at $3.99) that sell near 100K copies, a few Superman books and other titles that sell 40K - 50K, then a bunch of titles in the 10K - 15K range, this new slate will feature two Batman books and two Harley Quinn books (at $2.99) per month that hopefully stay near 100K each, plus two issues per month of all the mid-range selling books. What's lost? The more creative, unique, or risky books that were tried (albeit briefly) in DCYou, but that didn't have the sales numbers to please the execs at DC. (EDIT: Here is my financial projection based on the sales numbers in the table above.)

In summary, although I really liked the creativity and diversity of the books down the line in the DCYou, I am excited for Rebirth because I think mainstays like Superman, Green Lantern, and Green Arrow might benefit from solid writers able to tell a unified story biweekly. I am also glad to see Cyborg and Suicide Squad coming out biweekly, not because they should be beholden to the movie universe but because it will be fun to see what the comic book creative teams can do with those characters in parallel to their development on the big screen.