Box Office Success: Suicide Squad and Guardians of the Galaxy

Apparently today is a day to crunch sales numbers. In addition to the strong comic book sales for DC, we can also take a look at the very good week that Suicide Squad had at the box office. In addition to August records for opening weekend, it also posted some of the best weekdays ever for a superhero film.

Some of those prior records were held by Guardians of the Galaxy from Marvel Studios, and GotG is a good comparison for Suicide Squad because both movies were released in August (typically a much weaker box office month than May, June, and July) and both featured ensembles in a shared superhero universe. So let's take a closer look at GotG and Suicide Squad in terms of domestic box office performance (the Skwad hasn't opened yet in all international markets, and won't ever be opening in China, unlike GotG). The graph below shows cumulative domestic totals for both films.


Many of the blog posts about Suicide Squad have focused on the negative critical reviews or the disconnect between reviewers and movie fans. And appropriately, there were also a fair number of headlines pointing out the August opening record ($133.7 Million) set by Suicide Squad over the previous record holder GotG. (Before GotG, August movies were happy to hit $60 Million domestic.) But it's been unfortunate that more headlines have focused on the Friday-Sunday decline for Suicide Squad than the amazingly strong week Suicide Squad just posted. Its daily totals were consistently above mega-hits such as Batman v Superman, Captain America: Civil War, and Avengers: Age of Ultron.

All of that is to say that we should take a moment to appreciate at least the box office success of Suicide Squad, even if we have differing opinions on the quality of the movie. In the graph above, bear in mind that the blue line for GotG is the most successful August movie of all time...by a wide margin. Let that sink in, and then take a look at the pink Skwad line. You'll see that the Skwad has already posted $179.1 Million before the second weekend, and GotG only had $176.4 Million after its second weekend. But what if Suicide Squad nosedives like Batman v Superman did? Well...

Even if Skwad takes a 70% dive in its second weekend (which is possible simply because of the enormity of its opening weekend), that would still give it $40 Million for this weekend and a new domestic total close to $220 Million. Notice that GotG was at $222.4 Million after its third weekend. This means it is very likely that Suicide Squad will be running a full week ahead of GotG -- and that's nothing against GotG, which was a huge hit.

Now, even though movies make most of their money in the first couple weeks, it is still possible that the long legs of GotG will eventually win out over Suicide Squad. We'll see. But the other thing to keep in mind is that the budgets were quite different on these two films. The Skwad clocked in at $175 Million (plus marketing expenses, which were probably around $125 Million), whereas GotG cost $232 Million to make (plus marketing). So that allows us to look at a new graph that maps out the ratio between the domestic gross and the production expenses.


From this perspective, the success of Suicide Squad is even clearer. And by the way, you should put no credence in the rumors that Skwad needs $800 Million worldwide to break even... that has been debunked. In actuality, movie studios like WB have lots of ways of defraying costs and they also usually get a larger share of the box office receipts on opening weekend than they do down the line, so if they are able to hit their budget number domestically, then once you factor in international box office totals (lower but still substantial profit shares), the film can be sitting pretty. For Suicide Squad, its domestic number has already surpassed its budget number and so by the end of its run the domestic total will be well beyond the budget, and the international total is looking strong thus far as well. So the take-home share for WB will be solid, not even counting the home media and licensing money yet.

All of this is to say, love it or hate it, Suicide Squad is performing exceptionally well. We should be willing to give some credit where credit is due. 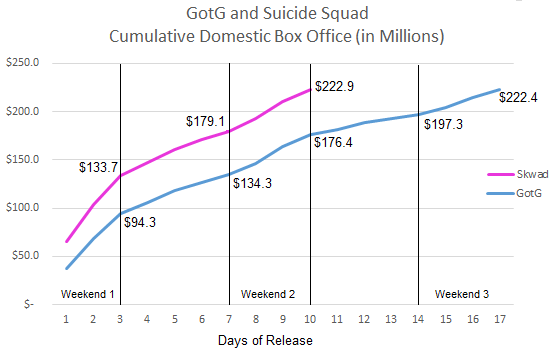