With the release and continued success of Suicide Squad, I got curious about what the data would say about the relationship between critic ratings (as aggregated on Metacritic -- I don't use Rotten Tomatoes anymore) and box office performance for superhero movies. To reduce the scope to something manageable, I decided to just look at the Top 40 superhero movies by worldwide box office performance. (And I haven't included Suicide Squad yet, even though it's already in the Top 40 after just one week. But at the end of this post, I will speculate on where Suicide Squad might end up.) 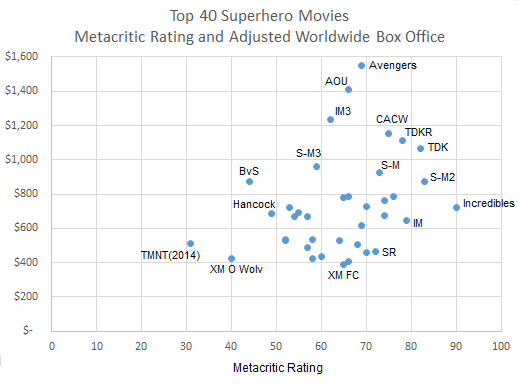 First of all, we can see a positive but weak relationship between the Metacritic rating and box office performance. The correlation coefficient is approximately 0.32, so there is definitely some predictive power based on critical reception but there are many other factors that also go into the final box office total. Some of those other factors (e.g., audience reaction, word-of-mouth) are certainly associated with critical reception while others (e.g., marketing effectiveness, MPAA rating, 3D screenings, international markets) are independent of critical reception.

For now, though, we'll forgot all those other factors and just look more closely at critical reception and box office performance. To see that critics certainly do not determine a movie's performance, just take a look at the 60-70 range for Metacritic scores. Within that column, there are about 12 movies and their box office performance runs the full gamut from less than $400 Million all the way up to $1.5 Billion. If critical reception were deterministic, this would be a much narrower range. (And recall that I've already adjusted for inflation, so it's not just that the lower movies were released earlier.)

Further evidence of the limitations of critical reception as a force on the box office is that Teenage Mutant Ninja Turtles (2014) and Batman v Superman performed quite well relative to their Metacritic scores. BvS, in particular, bucked the general trend of movies with a Metacritic rating lower than 58 being stuck below $750 Million. On the other end of the spectrum, The Incredibles pulled in the highest Metacritic rating of the set but was very middle-of-the-road in its box office total (although keep in mind that it's middle of the road with respect to the Top 40 superhero movies ... it's clearly above average with respect to all superhero movies).

Critics as a barrier to runaway success

Now, even though critical reception is not deterministic of performance, we can see that it (and its associated factors such as word-of-mouth) form somewhat of barrier for real break-out hits. All 8 of the movies that surpassed $900 Million adjusted worldwide had a Metacritic rating of at least 59. And with the exception of BvS, the 11 other movies that had Metacritic ratings below 59 all hit a ceiling at about $725 Million. In other words, if a superhero movie wants to make a run past $900 Million worldwide, then it is pretty much necessary (but not sufficient) to have a Metacritic rating of at least 59. It doesn't really matter if its in the 60s, 70s, or higher -- it just needs to get beyond 59 to remove that barrier from its success.

What does all of this mean for Suicide Squad?

Suicide Squad had a record August opening and a very strong follow-up week, but before it was even released, we knew that its Metacritic score was a 40. Based on the analysis above, this basically means that $900 Million was out of the question right from the start. And realistically, $800 Million wasn't going to happen either because Batman v Superman was a rare exception to the rule.

But something along the lines of $700-725 Million worldwide is not impossible. I, for one, think it is a much better film than X-Men Origins: Wolverine (the other superhero film with a Metacritic rating of exactly 40) and it is certainly better than the other poorly reviewed superhero movies that didn't even make the Top 40 graph above (e.g., Fantastic Four 2005). That at least gives it a fighting chance to continue up the box office ladder.

Not impossible, but I'd say $700+ Million is unlikely (even though I predicted $724 Million before the critical reviews came out). If I had to make a personal prediction based on its reviews and its performance up through its second Friday, I would say that Suicide Squad will finish out around $615 Million --- a good showing, placing it 25th on the list. 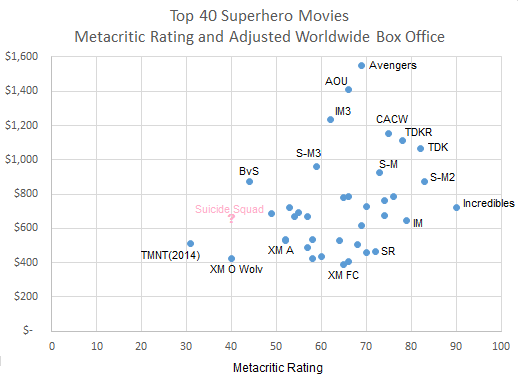