The era of comic-book movies (CBMs), and specifically superhero CBMs, is still in full swing. In fact, I don't think it has peaked yet and as long as we keep getting highly engaging stories and diverse styles (I think Deadpool, Batman v Superman and Suicide Squad will all help keep things fresh), I think we can count on several more years of the genre dominating the movie box office.

2016 may be the best year yet for CBMs, surpassing even 2008 which contained the release of The Dark Knight and the launch of the Marvel Cinematic Universe. With the first CBM less than two weeks away, I'm going to record my predictions for the box office performances of the full slate. There are going to be some massive hits, but I don't think they can all be smash successes. These predictions are informed by past performance, my own gut instincts based on trailers I've seen and my interpretation of the release calendar (e.g., BvS doesn't have much competition for a full month), and social media analysis such as Variety's Digital Audience Ratings (which has BvS and Suicide Squad leading the crowded pack). 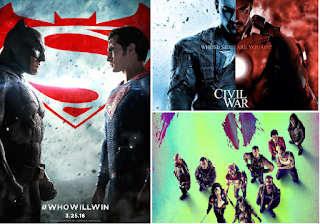 Here are my worldwide box office predictions for the 2016 CBMs, in release order:
Some notes: others may have Deadpool making more than I do, but remember that it was a modest budget so it's still a big moneymaker for Fox. I think BvS should beat Iron Man 3 ($1,215 Million). Most will probably have Civil War surpassing $1 Billion, but I think it takes a dip below Age of Ultron just because of MCU fatigue and the general public getting swamped with too many characters -- still quite a bit higher than previous Cap films, though. I think TMNT 2 avoids a bomb but it comes in lower than the original ($490 Million), partially due to competition with X-Men and Independence Day. I think Suicide Squad performs well because people love the Joker and Harley, it's social media buzz is really high, and it doesn't have much competition after its release (with just Star Trek Beyond providing competition ahead of release) -- I think the Squad comes in as the final hit of the summer. In the fall, I think Doctor Strange does roughly Ant-Man numbers, held back a bit by its director.

Here are the same predictions but arranged in performance order:
Based on these numbers, some may view it as a downturn for the genre (Civil War making less than both Avengers movies, Apocalypse making less than Days of Future Past, Doctor Strange making less than Ant-Man, TMNT 2 making less than TMNT 1) but I think these performances would actually be very good overall. These movies are all making money, and it would avoid a bomb like 2015's Fantastic Four. Basically, the genre is increasing the number of movies and so they won't all make top dollar, but BvS will come out on top and the full set shows good health for the genre overall.

Let me know what I got wrong in the comments or @ottensam on Twitter. You can also find more explanations of my predictions in this video.
Posted by ottensam at 9:12 AM