Prez: Comic-Book Satire at its Best

Rating: 5 out of 5! As part of DC Comic's DC You line in 2015, Mark Russell gave us Prez, which has now been collected in graphic novel form as Prez: Corndog-in-Chief. It takes place 20 years in the future and Russell uses this time lapse to show us the satirical but also frighteningly plausible world that we are headed for. He takes things like drone strikes, social media frenzies, reality television, corporate personhood, and political party dynamics to their logical conclusions. Every page of the graphic novel contains insight, humor, and creativity, and as a work of art it forces us to reflect on the state of our society.


Russell does a masterful job of balancing national and even international politics with the profoundly human character of Beth Ross, a teenager who through a series of coincidences becomes president of the United States (it actually makes a lot of sense in the context of the story!). Through her pure heart and naivete, and with the help of Anonymous hackers, we see the corruption of the power systems for what they are. Along the way Russell treats us to an amazing set of biting satirical stabs. Here are a few of my favorites: 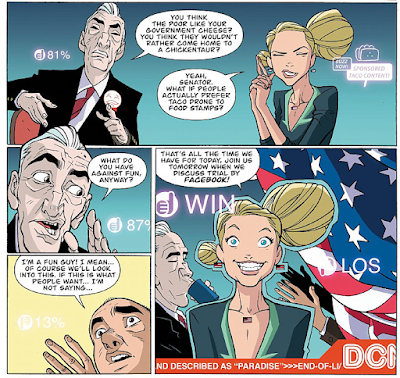 The art in the book is also brilliant in spots -- especially the issues under the helm of Ben Caldwell (pencils) and Jeremy Lawson (colors). The style is unique and fits well with Russell's storytelling, and overall it gives the book more of an independent comic feel than is typical from DC Comics. There is a drop in art quality for issue 4, but it doesn't hold back the work overall. And if the trade paperback sells well enough, Mark Russell has hinted on Twitter that a new volume might be possible in Fall 2016.

I loved this book and recommend it to anyone who enjoys satire, who is a bit jaded by the current political situation, or who is closely following the 2016 presidential election. I think it even works for people who don't typically read comic books, as long as they know how to parse full-fledged satire. And although the humor is strong, Russell also manages to weave together a plot, character development (Beth is the standout, as is a sentient military sentry, and the "villains" are compelling), and scenes that are both touching and troubling. My favorite book of 2015!
Posted by ottensam at 5:48 PM