For years, Marvel has been the dominant force in the comic book market. But DC's Rebirth initiative -- together with the success of the films, the television shows, and cross-product initiatives like Superhero Girls -- may be in the midst of shifting the market complexion. In June 2016, DC gained some ground on Marvel and raised comic book sales overall. Then in July 2016, DC actually accomplished the rare feat of overtaking Marvel.

Now the August sales numbers have been released and, with positive reception and strong carryovers from issue to issue in the Rebirth series, DC has extended its lead over Marvel. 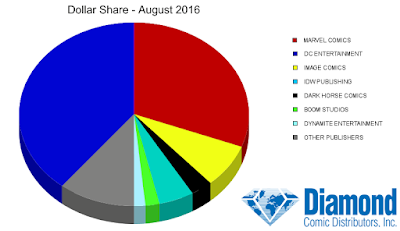 Perhaps even more impressive than the market share number was that DC claimed 9 of the Top 10 slots for physical copies sold. (Digital sales numbers are not public.) Amazing Spider-Man is the only Marvel entry in the Top 10, coming in at #4. For DC, Harley Quinn was the overall #1, and the Top 10 also featured All-Star Batman, Suicide Squad, Batman, Justice League, and Supergirl. From that list, it's pretty clear that the cross-media synergy is strong for Warner Brothers and DC.

I have been enjoying and thus reading many more of the DC Rebirth titles than I expected. Here are my personal favorites, in no particular order (ask me next week and they will probably be different because I like so many of the books):
On the graphic novel side of things, I give a strong recommendation for The Omega Men. I would've loved to see that in the Top 10 for collected editions.
Posted by ottensam at 7:59 AM