AQUAMAN's Box Office Trajectory in Comparison to the DCEU Films

On the Justice League Universe podcast, we tend to focus on the substance of films in the DCEU, but I can't help but check into the business side of things from time to time because, after all, I want to make sure that the cinematic universe I love will continue. (I also happen to work with mathematics as my career, so I enjoy crunching the numbers.)

With the DCEU on its way to $4.5 Billion over the first six movies, produced with a total budget of $1.18 Billion (so a ROI of 282% before counting home media, licensing, merchandise, etc.), it is an undeniable financial success, which is why we have Shazam!, Birds of Prey and the Fantabulous Emancipation of One Harley Quinn, and Wonder Woman 1984 already in the pipeline, with many other DCEU films in development.

Aquaman has been unique in its international-release-first strategy and its timing around the holiday season. Internationally, Aquaman is a massive success, already reeling in $470 Million and on its way to probably being the highest grossing DCEU film outside the U.S. (BvS had $543 Million abroad.) But I was also curious to see how Aquaman's holiday season performance in the U.S. compared with the past DCEU films.

Here is a graph of the cumulative box office performance (U.S.) during the first month of release for each of the six DCEU films. 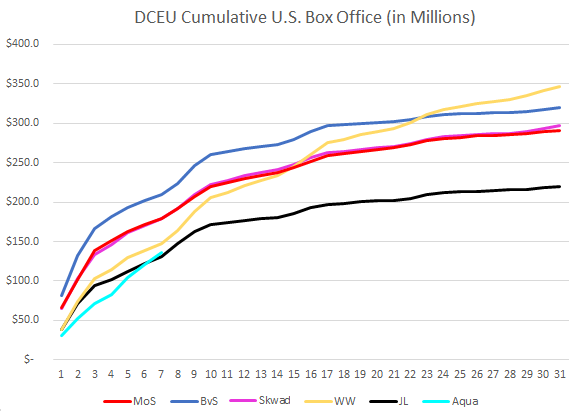 Let's look first at Aquaman (in light aqua-blue). It started with the lowest opening weekend, but it has the benefit of the Christmas holiday (Tuesday) and the forthcoming holiday weekend to make up ground. Indeed, with the days around Christmas, Aquaman has already moved up to surpass Justice League. And projections are such that Aquaman is expected to have the best second-weekend hold of any DCEU movie, so I expect it to stay above Justice League and possibly make a gradual move upward toward the Man of Steel and Suicide Squad curves, though probably not fully reaching them. If it can continue to dominate through January (it's primary competition, I think, will be Glass by M. Night Shyamalan), then Aquaman will post a sizeable U.S. box office total above $230 Million that, when combined with the huge international numbers, will make it the highest grossing DCEU film to date.

Some other interesting things to notice about the graph above: