Wonder Woman, directed by Patty Jenkins, has been making headlines not only because of its domestic opening over $100 Million, but also because of its astoundingly good performance in subsequent weekends. Rather than the typical superhero drop of 55-70% for the second weekend (because superhero fans often come out in hordes on opening weekend), Wonder Woman fell only 43%!!! This speaks to positive word-of-mouth and also a general appeal to all ages and to people who don't always come out for superhero movies. Throughout the weekdays, Wonder Woman was also consistently surpassing previous hit superhero films, and now its third weekend posted a mere 30% decline. This is incredible staying power on the domestic side, boosted somewhat by Pirates 5 having an underwhelming run in the U.S. If Transformers 5 also lightens up a bit in the U.S. compared to previous installments, then Wonder Woman will run strong through to the arrival of Spider-Man Homecoming. (Pirates 5 and Transformers 5 are bigger hits internationally, and that might be part of why Wonder Woman is rocking the States even harder than it's rocking the international box office.)

How does Wonder Woman's incredible box office run thus far compare with other recent superhero origin films? I am a mathematics educator by profession, so I enjoy seeing data visually. Here is a depiction of Wonder Woman's domestic box office tally compared to the six solo origin films in the Marvel Cinematic Universe as well as the other solo origin film in the DCEU (Man of Steel) and, to give us a sense of the top end, I've also included the runaway hit, Deadpool from Fox.

NOTE: This graph, with dollars in millions, shows the accumulation for the first 24 days of release, and then I included the final domestic total at the far right. 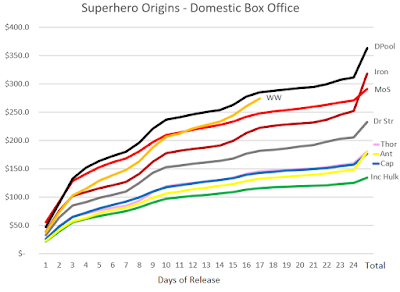 Notice that, for the opening weekend, Wonder Woman behaved very much like typical box office contour, tracking right along with Iron Man. But then right away on its first weekdays, we can see that Wonder Woman is doing something different than usual -- it slashes upward, bringing in higher rates each day and then for the second and third weekend, allowing it to move from the middle of the pack all the way up to Deadpool's heels (and Deadpool also had very strong legs). If Wonder Woman can keep up its pace for another week or so, we should already see it surpass Deadpool's domestic total at that point in it's run. I suspect that this will happen by Thursday, June 22nd. From then onward, if it can at least hold as well as Deadpool did, it will surpass $365 Million in the U.S. for a worldwide total of at least $730 Million. (Shameless self-promotion: back in February I predicted $725 Million for Wonder Woman.)

For those of you who enjoy more of the details of Hollywood accounting, join me below the fold.

The following graph presents the domestic box office total as a ratio of the movie's production budget. This better illustrates the profitability of each movie and also accounts for inflation to a limited extent (because the box office $$ and the production $$ are both in dollars with the same value). I removed Deadpool because it breaks the graph, going all the way up to 648% of its production budget! 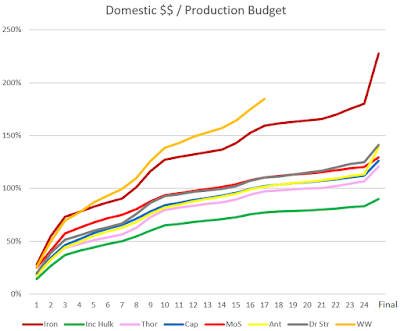 Now it has become clear that there is a cluster of superhero origin films that make approximately 120-140% of their production budget in the domestic box office, and then of course they would also have the international box office. Coming in well below the cluster of what we might call "typical performance" is The Incredible Hulk (only 90% of its production budget) and coming in well above is Iron Man (227%). We can also see that Wonder Woman is heading way up to that higher rank, on a trajectory to surpass even Iron Man.

If you are curious about how Wonder Woman compares to recent superhero team movies, here is another graph that I made that includes Guardians of the Galaxy and Suicide Squad -- two monster hits in the genre. Wonder Woman is outpacing both. 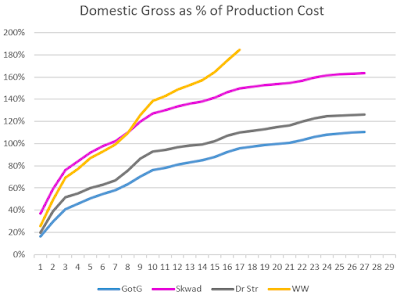